The first people to live in Britain were hunter-gatherers, in what we call the Stone Age. For much of the Stone Age, Britain was connected to the continent by a land bridge. People came and went, following the herds of deer and horses which they hunted. Britain only became permanently separated from the continent by the Channel about 10,000 years ago.

The first farmers arrived in Britain 6,000 years ago. The ancestors of these first farmers probably came from south-east Europe. These people-built houses, tombs and monuments on the land. One of these monuments, Stonehenge, still stands in what is now the English county of Wiltshire. Stonehenge was probably a special gathering place for seasonal ceremonies. Other Stone Age sites have also survived. Skara Brae on Orkney, off the north coast of Scotland, is the best-preserved prehistoric village in northern Europe, and has helped archaeologists to understand more about how people lived near the end of the Stone Age.

Around 4,000 years ago, people learned to make bronze. We call this period the Bronze Age. People lived in roundhouses and buried their dead in tombs called round barrows. The people of the Bronze Age were accomplished metalworkers who made many beautiful objects in bronze and gold, including tools, ornaments and weapons. The Bronze Age was followed by the Iron Age, when people learned how to make weapons and tools out of iron. People still lived in roundhouses, grouped together into larger settlements, and sometimes defended sites called hill forts. A very impressive hill fort can still be seen today at Maiden Castle, in the English county of Dorset. Most people were farmers, craft workers or warriors. The language they spoke was part of the Celtic language family. Similar languages were spoken across Europe in the Iron Age, and related languages are still spoken today in some parts of Wales, Scotland and Ireland. The people of the Iron Age had a sophisticated culture and economy. They made the first coins to be minted in Britain, some inscribed with the names of Iron Age kings. This marks the beginnings of British history.

Julius Caesar led a Roman invasion of Britain in 55 BC. This was unsuccessful and for nearly 100 years Britain remained separate from the Roman Empire. In AD 43 the Emperor Claudius led the Roman army in a new invasion. This time, there was resistance from some of the British tribes but the Romans were successful in occupying almost all of Britain. One of the tribal leaders who fought against the Romans was Boudicca, the queen of the Iceni in what is now eastern England. She is still remembered today and there is a statue of her on Westminster Bridge in London, near the Houses of Parliament.

Areas of what is now Scotland were never conquered by the Romans, and the Emperor Hadrian built a wall in the north of England to keep out the Picts (ancestors of the Scottish people). Included in the wall were a number of forts. Parts of Hadrian’s Wall, including the forts of Housesteads and Vindolanda, can still be seen. It is a popular area for walkers and is a UNESCO (United Nations Educational, Scientific and Cultural Organization) World Heritage Site.

The Romans remained in Britain for 400 years. They built roads and public buildings, created a structure of law, and introduced new plants and animals. It was during the 3rd and 4th centuries AD that the first Christian communities began to appear in Britain.

The Roman army left Britain in AD 410 to defend other parts of the Roman Empire and never returned. Britain was again invaded by tribes from northern Europe: the Jutes, the Angles and the Saxons. The languages they spoke are the basis of modern-day English. Battles were fought against these invaders but, by about AD 600, Anglo-Saxon kingdoms were established in Britain. These kingdoms were mainly in what is now England. The burial place of one of the kings was at Sutton Hoo in modern Suffolk. This king was buried with treasure and armour, all placed in a ship which was then covered by a mound of earth. Parts of the west of Britain, including much of what is now Wales, and Scotland, remained free of Anglo-Saxon rule.

The Anglo-Saxons were not Christians when they first came to Britain but, during this period, missionaries came to Britain to preach about Christianity. Missionaries from Ireland spread the religion in the north. The most famous of these were St Patrick, who would become the patron saint of Ireland (See Chapter 4, Religion) and St Columba, who founded a monastery on the island of Iona, off the coast of what is now Scotland. St Augustine led missionaries from Rome, who spread Christianity in the south. St Augustine became the first Archbishop of Canterbury (See Chapter 4, Religion). 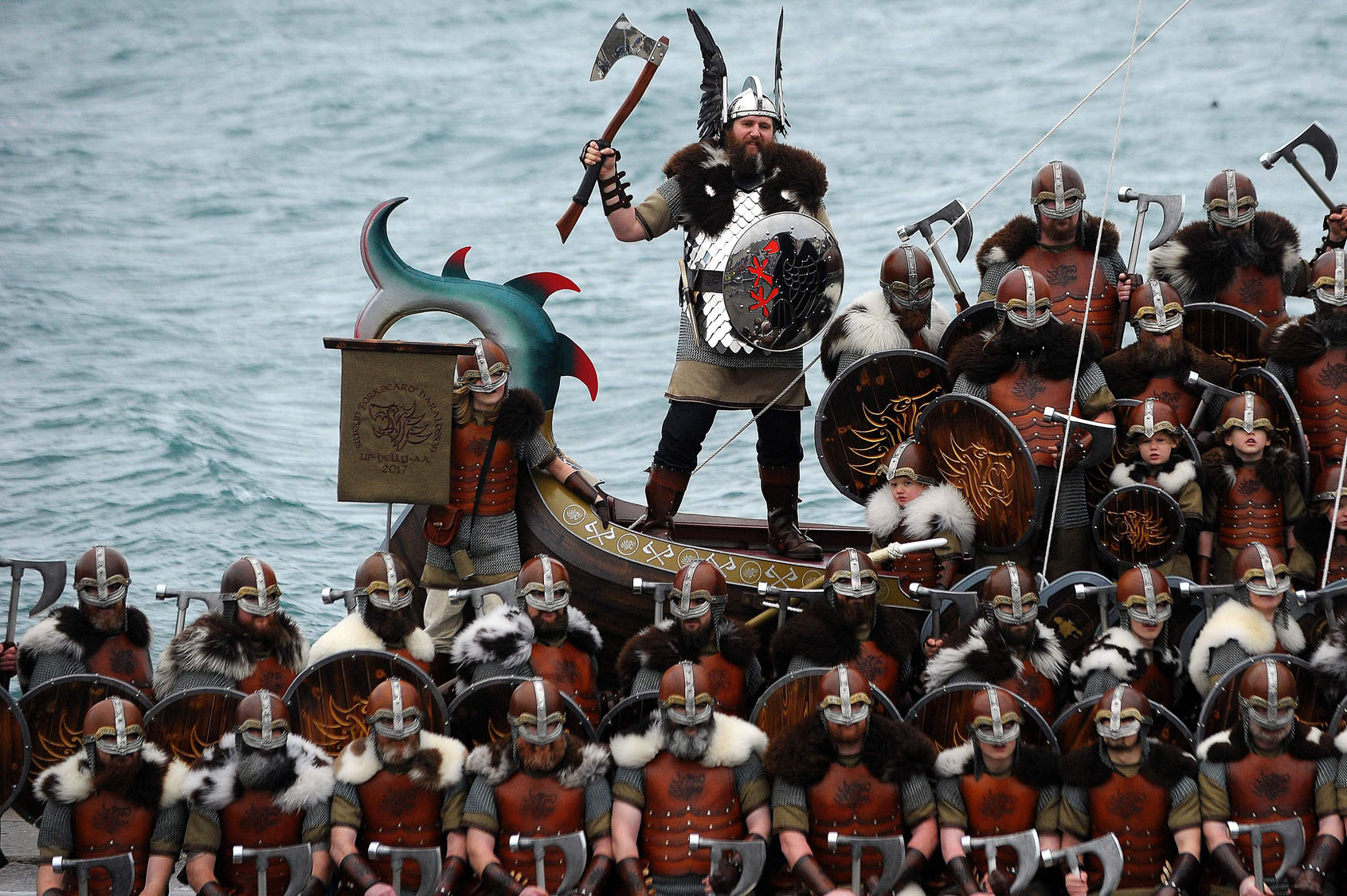 A modern representation of the Vikings: people dressed as Vikings

The Vikings came from Denmark and Norway. They first visited Britain in AD 789 to raid coastal towns and take away goods and slaves. Then, they began to stay and form their own communities in the east of England and Scotland. The Anglo-Saxon kingdoms in England united under King Alfred the Great, who defeated the Vikings. Many of the Viking invaders stayed in Britain – especially in the east and north of England, in an area known as the Danelaw (many place names there, such as Grimsby and Scunthorpe, come from the Viking languages). The Viking settlers mixed with local communities and some converted to Christianity.

Anglo-Saxon kings continued to rule what is now England, except for a short period when there were Danish kings. The first of these was Cnut, also called Canute.

In the north, the threat of attack by Vikings had encouraged the people to unite under one king, Kenneth MacAlpin. The term Scotland began to be used to describe that country.

In 1066, an invasion led by William, the Duke of Normandy (in what is now northern France), defeated Harold, the Saxon king of England, at the Battle of Hastings. Harold was killed in the battle. William became king of England and is known as William the Conqueror. The battle is commemorated in a great piece of embroidery, known as the Bayeux Tapestry, which can still be seen in France today.

The Norman Conquest was the last successful foreign invasion of England and led to many changes in government and social structures in England. Norman French, the language of the new ruling class, influenced the development of the English language as we know it today. Initially the Normans also conquered Wales, but the Welsh gradually won territory back. The Scots and the Normans fought on the border between England and Scotland; the Normans took over some land on the border but did not invade Scotland. 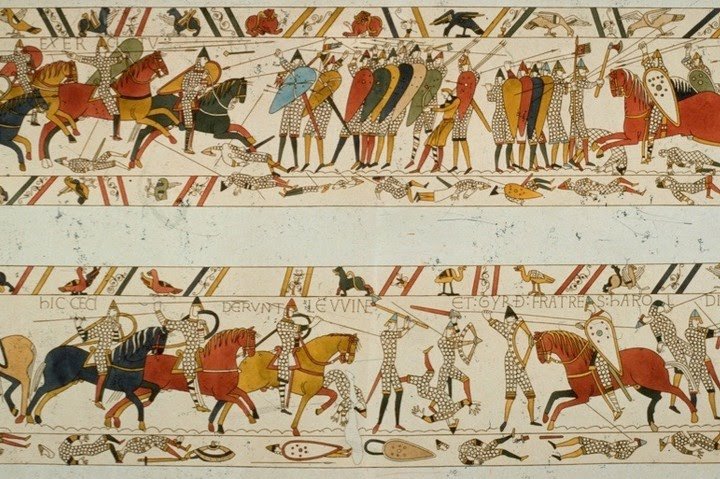 William sent people all over England to draw up lists of all the towns and villages. The people who lived there, who owned the land and what animals they owned were also listed. This was called the Domesday Book. It still exists today and gives a picture of society in England just after the Norman Conquest.