The early 20th century was a time of optimism in Britain. The nation, with its expansive Empire, well-admired navy, thriving industry and strong political institutions, was what is now known as a global ‘superpower’. It was also a time of social progress. Financial help for the unemployed, old-age pensions and free school meals were just a few of the important measures introduced. Various laws were passed to improve safety in the workplace; town planning rules were tightened to prevent the further development of slums; and better support was given to mothers and their children after divorce or separation. Local government became more democratic and a salary for members of Parliament (MPs) was introduced for the first time, making it easier for more people to take part in public life. 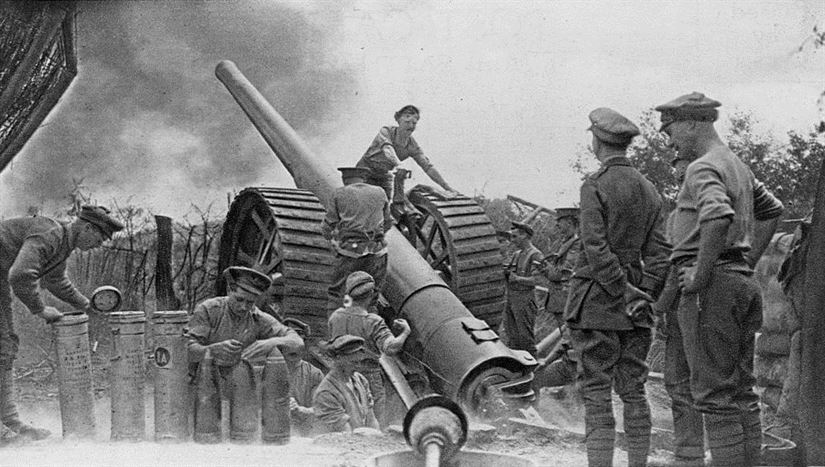 Representation of the First World War

This era of optimism and progress was cut short when war broke out between several European nations. On 28 June 1914, Archduke Franz Ferdinand of Austria was assassinated. This set off a chain of events leading to the First World War (1914–18). But while the assassination provided the trigger for war, other factors – such as a growing sense of nationalism in many European states; increasing militarism; imperialism; and the division of the major European powers into two camps – all set the conditions for war.

The conflict was centred in Europe, but it was a global war involving nations from around the world. Britain was part of the Allied Powers, which included (amongst others) France, Russia, Japan, Belgium, Serbia – and later, Greece, Italy, Romania and the United States. The whole of the British Empire was involved in the conflict – for example, more than a million Indians fought on behalf of Britain in lots of different countries, and around 40,000 were killed. Men from the West Indies, Africa, Australia, New Zealand and Canada also fought with the British. The Allies fought against the Central Powers – mainly Germany, the Austro-Hungarian Empire, the Ottoman Empire and later Bulgaria. Millions of people were killed or wounded, with more than 2 million British casualties. One battle, the British attack on the Somme in July 1916, resulted in about 60,000 British casualties on the first day alone.

The First World War ended at 11.00 am on 11th November 1918 with victory for Britain and its allies.

The partition of Ireland

In 1913, the British government promised ‘Home Rule’ for Ireland. The proposal was to have a self-governing Ireland with its own parliament but still part of the UK. A Home Rule Bill was introduced in Parliament. It was opposed by the Protestants in the north of Ireland, who threatened to resist Home Rule by force.

The outbreak of the First World War led the British government to postpone any changes in Ireland. Irish Nationalists were not willing to wait and in 1916 there was an uprising (the Easter Rising) against the British in Dublin. The leaders of the uprising were executed under military law. A guerrilla war against the British army and the police in Ireland followed. In 1921 a peace treaty was signed and in 1922 Ireland became two countries. The six counties in the north which were mainly Protestant remained part of the UK under the name Northern Ireland. The rest of Ireland became the Irish Free State. It had its own government and became a republic in 1949.

There were people in both parts of Ireland who disagreed with the split between the North and the South. They still wanted Ireland to be one independent country. Years of disagreement led to a terror campaign in Northern Ireland and elsewhere. The conflict between those wishing for full Irish independence and those wishing to remain loyal to the British government is often referred to as ‘the Troubles’.

In the 1920s, many people’s living conditions got better. There were improvements in public housing and new homes were built in many towns and cities. However, in 1929, the world entered the ‘Great Depression’ and some parts of the UK suffered mass unemployment. The effects of the depression of the 1930s were felt differently in different parts of the UK. The traditional heavy industries such as shipbuilding were badly affected but new industries – including the automobile and aviation industries – developed. As prices generally fell, those in work had more money to spend. Car ownership doubled from 1 million to 2 million between 1930 and 1939. In addition, many new houses were built. It was also a time of cultural blossoming, with writers such as Graham Greene and Evelyn Waugh prominent. The economist John Maynard Keynes published influential new theories of economics. The BBC started radio broadcasts in 1922 and began the world’s first regular television service in 1936.

Adolf Hitler came to power in Germany in 1933. He believed that the conditions imposed on Germany by the Allies after the First World War were unfair; he also wanted to conquer more land for the German people. He set about renegotiating treaties, building up arms, and testing Germany’s military strength in nearby countries. The British government tried to avoid another war. However, when Hitler invaded Poland in 1939, Britain and France declared war in order to stop his aggression.

The war was initially fought between the Axis powers (fascist Germany and Italy and the Empire of Japan) and the Allies. The main countries on the allied side were the UK, France, Poland, Australia, New Zealand, Canada, and the Union of South Africa.

Having occupied Austria and invaded Czechoslovakia, Hitler followed his invasion of Poland by taking control of Belgium and the Netherlands. Then, in 1940, German forces defeated allied troops and advanced through France. At this time of national crisis, Winston Churchill became Prime Minister and Britain’s war leader.

Churchill was the son of a politician and, before becoming a Conservative MP in 1900, was a soldier and journalist. In May 1940 he became Prime Minister. He refused to surrender to the Nazis and was an inspirational leader to the British people in a time of great hardship. He lost the General Election in 1945 but returned as Prime Minister in 1951.

He was an MP until he stood down at the 1964 General Election. Following his death in 1965, he was given a state funeral. He remains a much-admired figure to this day, and in 2002 was voted the greatest Briton of all time by the public. During the War, he made many famous speeches including lines which you may still hear:

‘I have nothing to offer but blood, toil, tears and sweat’ Churchill’s first speech to the House of Commons after he became Prime Minister, 1940.

‘We shall fight on the beaches,

we shall fight on the landing grounds,

we shall fight in the fields and in the streets,

we shall fight in the hills;

‘Never in the field of human conflict was so much owed by so many to so few’ Speech to the House of Commons during the Battle of Britain 1940.

As France fell, the British decided to evacuate British and French soldiers from France in a huge naval operation. Many civilian volunteers in small pleasure and fishing boats from Britain helped the Navy to rescue more than 300,000 men from the beaches around Dunkirk. Although many lives and a lot of equipment were lost, the evacuation was a success and meant that Britain was better able to continue the fight against the Germans. The evacuation gave rise to the phrase ‘the Dunkirk spirit’.

From the end of June 1940 until the German invasion of the Soviet Union in June 1941, Britain and the Empire stood almost alone against Nazi Germany.

Hitler wanted to invade Britain, but before sending in troops, Germany needed to control the air. The Germans waged an air campaign against Britain, but the British resisted with their fighter planes and eventually won the crucial aerial battle against the Germans, called ‘the Battle of Britain’, in the summer of 1940. The most important planes used by the Royal Air Force in the Battle of Britain were the Spitfire and the Hurricane – which were designed and built in Britain. Despite this crucial victory, the German air force was able to continue bombing London and other British cities at night-time. This was called the Blitz. Coventry was almost totally destroyed and a great deal of damage was done in other cities, especially in the East End of London. Despite the destruction, there was a strong national spirit of resistance in the UK. The phrase ‘the Blitz spirit’ is still used today to describe Britons pulling together in the face of adversity.

At the same time as defending Britain, the British military was fighting the Axis on many other fronts. In Singapore, the Japanese defeated the British and then occupied Burma, threatening India. The United States entered the war when the Japanese bombed its naval base at Pearl Harbour in December 1941.

That same year, Hitler attempted the largest invasion in history by attacking the Soviet Union. It was a fierce conflict, with huge losses on both sides. German forces were ultimately repelled by the Soviets, and the damage they sustained proved to be a pivotal point in the war. 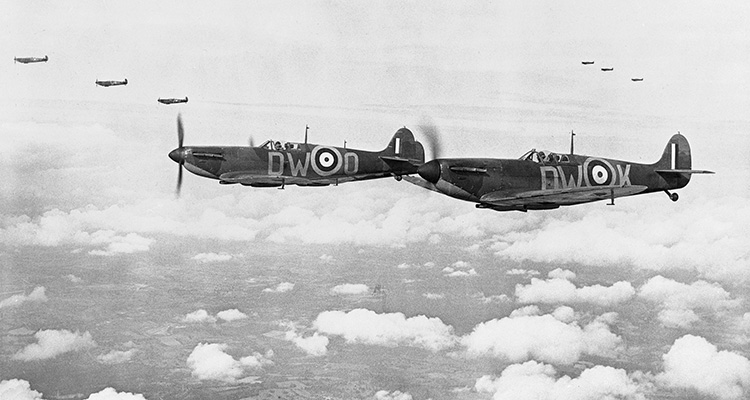 The allied forces gradually gained the upper hand, winning significant victories in North Africa and Italy. German losses in the Soviet Union, combined with the support of the Americans, meant that the Allies were eventually strong enough to attack Hitler’s forces in Western Europe. On 6 June 1944, allied forces landed in Normandy (this event is often referred to as ‘D-Day’). Following victory on the beaches of Normandy, the allied forces pressed on through France and eventually into Germany. The Allies comprehensively defeated Germany in May 1945.

The war against Japan ended in August 1945 when the United States dropped its newly developed atom bombs on the Japanese cities of Hiroshima and Nagasaki. Scientists led by New-Zealand-born Ernest Rutherford, working at Manchester and then Cambridge University, were the first to ‘split the atom’. Some British scientists went on to take part in the Manhattan Project in the United States, which developed the atomic bomb. The war was finally over.

Born in Scotland, Fleming moved to London as a teenager and later qualified as a doctor. He was researching influenza (the ‘flu’) in 1928 when he discovered penicillin. This was then further developed into a usable drug by the scientists Howard Florey and Ernst Chain. By the 1940s it was in mass production. Fleming won the Nobel Prize in Medicine in 1945. Penicillin is still used to treat bacterial infections today.