The development of British democracy

Democracy is a system of government where the whole adult population gets a say. This might be by direct voting or by choosing representatives to make decisions on their behalf.

At the turn of the 19th century, Britain was not a democracy as we know it today. Although there were elections to select members of Parliament (MPs), only a small group of people could vote. They were men who were over 21 years of age and who owned a certain amount of property.

The franchise (that is, the number of people who had the right to vote) grew over the course of the 19th century and political parties began to involve ordinary men and women as members.

In the 1830s and 1840s, a group called the Chartists campaigned for reform. They wanted six changes:

At the time, the campaign was generally seen as a failure. However, by 1918 most of these reforms had been adopted. The voting franchise was also extended to women over 30, and then in 1928 to men and women over 21. In 1969, the voting age was reduced to 18 for men and women.

A constitution is a set of principles by which a country is governed. It includes all of the institutions that are responsible for running the country and how their power is kept in check. The constitution also includes laws and conventions. The British constitution is not written down in any single document, and therefore it is described as ‘unwritten’. This is mainly because the UK, unlike America or France, has never had a revolution which led permanently to a totally new system of government. Our most important institutions have developed over hundreds of years. Some people believe that there should be a single document, but others believe an unwritten constitution allows for more flexibility and better government.

In the UK, there are several different parts of government. The main ones are:

In addition, there are devolved governments in Scotland, Wales and Northern Ireland that have the power to legislate on certain issues.

Queen Elizabeth II is the head of state of the UK. She is also the monarch or head of state for many countries in the Commonwealth. The UK has a constitutional monarchy. This means that the king or queen does not rule the country but appoints the government, which the people have chosen in a democratic election. The monarch invites the leader of the party with the largest number of MPs, or the leader of a coalition between more than one party, to become the Prime Minister. The monarch has regular meetings with the Prime Minister and can advise, warn and encourage, but the decisions on government policies are made by the Prime Minister and cabinet.

The Queen has reigned since her father’s death in 1952, and in 2012 she celebrated her Diamond Jubilee (60 years as queen). She is married to Prince Philip, the Duke of Edinburgh. Her eldest son, Prince Charles (the Prince of Wales), is the heir to the throne.

The Queen has important ceremonial roles, such as the opening of the new parliamentary session each year. On this occasion the Queen makes a speech which summarises the government’s policies for the year ahead. All Acts of Parliament are made in her name.

The Queen represents the UK to the rest of the world. She receives foreign ambassadors and high commissioners, entertains visiting heads of state, and makes state visits overseas in support of diplomatic and economic relationships with other countries.

The Queen has an important role in providing stability and continuity. While governments and Prime Ministers change regularly, the Queen continues as head of state. She provides a focus for national identity and pride, which was demonstrated through the celebrations of her Jubilee.

The National Anthem of the UK is ‘God Save the Queen’. It is played at important national occasions and at events attended by the Queen or the Royal Family. The first verse is:

‘God save our gracious Queen!

God save the Queen!

Long to reign over us,

God save the Queen!’

New citizens swear or affirm loyalty to the Queen as part of the citizenship ceremony.

‘I (name) swear by Almighty God that on becoming a British citizen, I will be faithful and bear true allegiance to Her Majesty Queen Elizabeth the Second, her Heirs and Successors, according to law.’

‘I (name) do solemnly, sincerely and truly declare and affirm that on becoming a British citizen, I will be faithful and bear true allegiance to Her Majesty Queen Elizabeth the Second, her Heirs and Successors, according to law.’

The system of government in the UK is a parliamentary democracy. The UK is divided into parliamentary constituencies. Voters in each constituency elect their member of Parliament (MP) in a General Election. All of the elected MPs form the House of Commons. Most MPs belong to a political party, and the party with the majority of MPs forms the government. If one party does not get a majority, two parties can join together to form a coalition.

The House of Commons 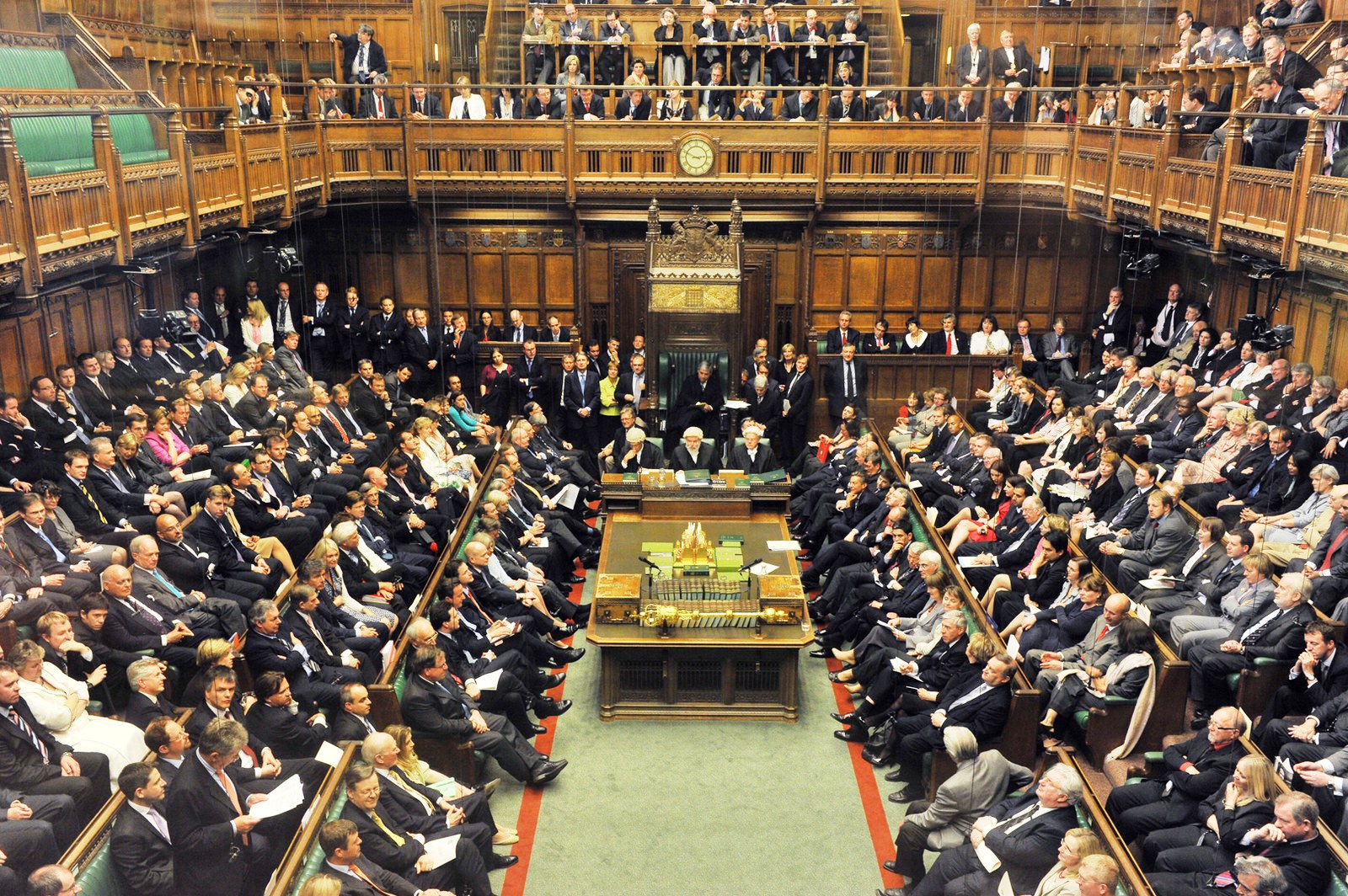 Parliamentary debates in the House of Commons

Each MP represents a parliamentary constituency, which is a small area of the country. MPs have a number of different responsibilities. They:

The House of Lords 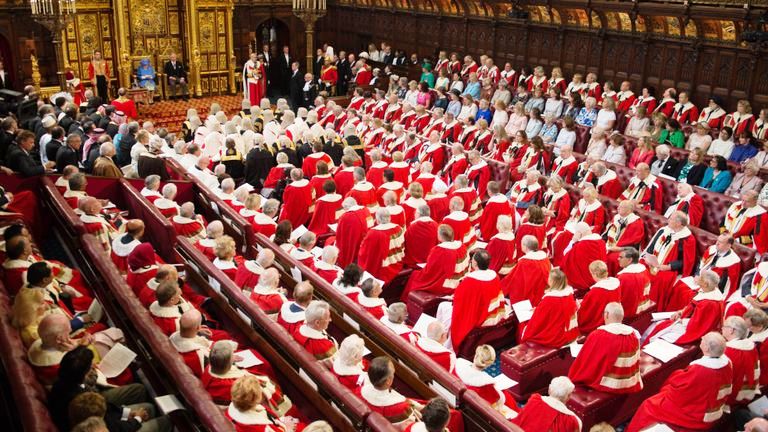 The House of Lords

Since 1958, the Prime Minister has had the power to nominate peers just for their own lifetime. These are called life peers. They have usually had an important career in politics, business, law or another profession. Life peers are appointed by the monarch on the advice of the Prime Minister. They also include people nominated by the leaders of the other main political parties or by an independent Appointments Commission for non-party peers.

The Speaker keeps order during political debates to make sure the rules are followed. This includes making sure the opposition has a guaranteed amount of time to debate issues which it chooses. The Speaker also represents Parliament on ceremonial occasions.

MPs are elected at a General Election, which is held at least every five years.

If an MP dies or resigns, there will be a fresh election, called a byelection, in his or her constituency.

MPs are elected through a system called ‘first past the post’. In each constituency, the candidate who gets the most votes is elected. The government is usually formed by the party that wins the majority of constituencies. If no party wins a majority, two parties may join together to form a coalition.

All elected members have a duty to serve and represent their constituents. You can get contact details for all your representatives and their parties from your local library and from www.parliament.uk. MPs, Assembly members, members of the Scottish Parliament (MSPs) and MEPs are also listed in The Phone Book, published by BT, and in Yellow Pages.

You can contact MPs by letter or telephone at their constituency office, or at their office in the House of Commons: The House of Commons, Westminster, London SW1A 0AA, telephone 020 7129 3000. In addition, many MPs, Assembly members, MSPs and MEPs hold regular local ‘surgeries’, where constituents can go in person to talk about issues that are of concern to them. These surgeries are often advertised in the local newspaper.