The Prime Minister (PM) is the leader of the political party in power. He or she appoints the members of the cabinet and has control over many important public appointments. The official home of the Prime Minister is 10 Downing Street, in central London, near the Houses of Parliament. He or she also has a country house outside London called Chequers.

The Prime Minister appoints about 20 senior MPs to become ministers in charge of departments. These include:

These ministers form the cabinet, a committee which usually meets weekly and makes important decisions about government policy. Many of these decisions have to be debated or approved by Parliament.

Each department also has a number of other ministers, called Ministers of State and Parliamentary Under-Secretaries of State, who take charge of particular areas of the department’s work.

The second-largest party in the House of Commons is called the opposition. The leader of the opposition usually becomes Prime Minister if his or her party wins the next General Election.

The leader of the opposition leads his or her party in pointing out what they see as the government’s failures and weaknesses. One important opportunity to do this is at Prime Minister’s Questions, which takes place every week while Parliament is sitting. The leader of the opposition also appoints senior opposition MPs to be ‘shadow ministers’. They form the shadow cabinet and their role is to challenge the government and put forward alternative policies.

Anyone aged 18 or over can stand for election as an MP but they are unlikely to win unless they have been nominated to represent one of the major political parties. These are the Conservative Party, the Labour Party, the Liberal Democrats, or one of the parties representing Scottish, Welsh or Northern Irish interests.

There are a few MPs who do not represent any of the main political parties. They are called ‘independents’ and usually represent an issue important to their constituency.

The main political parties actively look for members of the public to join their debates, contribute to their costs, and help at elections for Parliament or for local government. They have branches in most constituencies and hold policy-making conferences every year.

Pressure and lobby groups are organisations which try to influence government policy. They play an important role in politics. Some are representative organisations such as the CBI (Confederation of British Industry), which represents the views of British business. Others campaign on particular topics, such as the environment (for example, Greenpeace) or human rights (for example, Liberty).

Civil servants support the government in developing and implementing its policies. They also deliver public services. Civil servants are accountable to ministers. They are chosen on merit and are politically neutral – they are not political appointees. People can apply to join the civil service through an application process, like other jobs in the UK. Civil servants are expected to carry out their role with dedication and a commitment to the civil service and its core values. These are: integrity, honesty, objectivity and impartiality (including being politically neutral).

Towns, cities and rural areas in the UK are governed by democratically elected councils, often called ‘local authorities’. Some areas have both district and county councils, which have different functions. Most large towns and cities have a single local authority.

Local authorities provide a range of services in their areas. They are funded by money from central government and by local taxes.

Since 1997, some powers have been devolved from the central government to give people in Wales, Scotland and Northern Ireland more control over matters that directly affect them. There has been a Welsh Assembly and a Scottish Parliament since 1999. There is also a Northern Ireland Assembly, although this has been suspended on a few occasions.

Policy and laws governing defence, foreign affairs, immigration, taxation and social security all remain under central UK government control. However, many other public services, such as education, are controlled by the devolved administrations.

The devolved administrations each have their own civil service.

The Welsh government and National Assembly for Wales are based in Cardiff, the capital city of Wales. The National Assembly has 60 Assembly members (AMs) and elections are held every four years using a form of proportional representation. Members can speak in either Welsh or English and all of the Assembly’s publications are in both languages.

The Assembly has the power to make laws for Wales in 21 areas, including:

Since 2011, the National Assembly for Wales has been able to pass laws on these topics without the agreement of the UK Parliament.

The Scottish Parliament was formed in 1999. It sits in Edinburgh, the capital city of Scotland.

A Northern Ireland Parliament was established in 1922, when Ireland was divided, but it was abolished in 1972, shortly after the Troubles broke out in 1969 (See Chapter 3, The 20th century).

The Northern Ireland Assembly was established soon after the Belfast Agreement (or Good Friday Agreement) in 1998. There is a power-sharing agreement which distributes ministerial offices amongst the main parties. The Assembly has 108 elected members, known as MLAs (members of the Legislative Assembly). They are elected with a form of proportional representation.

The Northern Ireland Assembly can make decisions on issues such as:

The UK government has the power to suspend all devolved assemblies. It has used this power several times in Northern Ireland when local political leaders found it difficult to work together. However, the Assembly has been running successfully since 2007.

The media and government

Proceedings in Parliament are broadcast on television and published in official reports called Hansard. Written reports can be found in large libraries and at www.parliament.uk. Most people get information about political issues and events from newspapers (often called ‘the press’), television, radio and the internet.

The UK has a free press. This means that what is written in newspapers is free from government control. Some newspaper owners and editors hold strong political opinions and run campaigns to try to influence government policy and public opinion.

By law, radio and television coverage of the political parties must be balanced and so equal time has to be given to rival viewpoints.

The UK has had a fully democratic voting system since 1928 (See Chapter 5, The British Constitution). The present voting age of 18 was set in 1969 and (with a few exceptions) all UK-born and naturalised adult citizens have the right to vote.

To be able to vote in a parliamentary, local or European election, you must have your name on the electoral register.

If you are eligible to vote, you can register by contacting your local council electoral registration office. This is usually based at your local council (in Scotland it may be based elsewhere). If you don’t know which local authority you come under, you can find out by visiting www.aboutmyvote.co.uk and entering your postcode. You can also download voter registration forms in English, Welsh and some other languages.

In Northern Ireland, a different system operates. This is called ‘individual registration’ and all those entitled to vote must complete their own registration form. Once registered, people stay on the register provided their personal details do not change. For more information see the Electoral Office for Northern Ireland website at www.eoni.org.uk

By law, each local authority has to make its electoral register available for anyone to look at, although this has to be supervised. The register is kept at each local electoral registration office (or council office in England and Wales). It is also possible to see the register at some public buildings such as libraries. 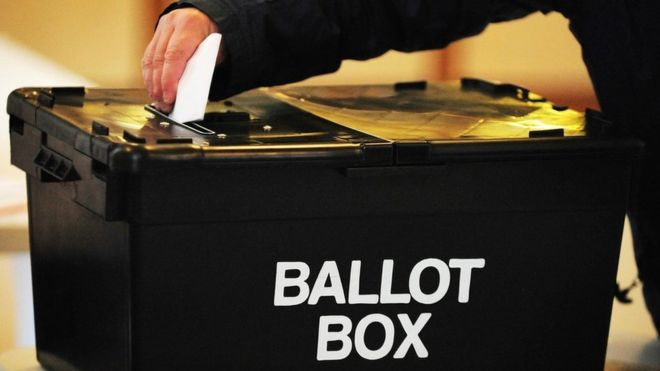 When you arrive at the polling station, the staff will ask for your name and address. In Northern Ireland you will also have to show photographic identification. You will then get your ballot paper, which you take to a polling booth to fill in privately. You should make up your own mind who to vote for. No one has the right to make you vote for a particular candidate. You should follow the instructions on the ballot paper. Once you have completed it, put it in the ballot box.

If it is difficult for you to get to a polling station or polling place, you can register for a postal ballot. Your ballot paper will be sent to your home before the election. You then fill it in and post it back. You can choose to do this when you register to vote.

Most citizens of the UK, the Ireland or the Commonwealth aged 18 or over can stand for public office. There are some exceptions, including:

Members of the House of Lords may not stand for election to the House of Commons but are eligible for all other public offices.

Visiting Parliament and the devolved administrations

The public can listen to debates in the Palace of Westminster from public galleries in both the House of Commons and the House of Lords.

You can write to your local MP in advance to ask for tickets or you can queue on the day at the public entrance. Entrance is free. Sometimes there are long queues for the House of Commons and people have to wait for at least one or two hours. It is usually easier to get in to the House of Lords.

You can find further information on the UK Parliament website at www.parliament.uk.

There are two ways to arrange a visit to Stormont. You can either contact the Education Service (details are on the Northern Ireland Assembly website at www.niassembly.gov.uk) or contact an MLA.

In Scotland the elected members, called MSPs, meet in the Scottish Parliament building at Holyrood in Edinburgh (for more information, see www.scottish.parliament.uk).

You can get information, book tickets or arrange tours through visitor services. You can write to them at the Scottish Parliament, Edinburgh, EH99 1SP, telephone 0131 348 5200 freephone 0800 092 7600 or email visit@parliament.scot

In Wales the elected members, known as AMs, meet in the Welsh Assembly in the Senedd in Cardiff Bay (for more information, see www.wales.gov.uk).

The Senedd is an open building. You can book guided tours or seats in the public galleries for the Welsh Assembly. To make a booking, contact the Assembly Booking Service on 0300 200 6565 or email contact@assembly.wales